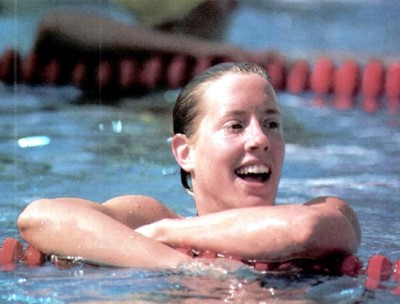 Theresa Andrews captured two US Olympic Gold Medals in the 1984 Games held in Los Angeles. Claiming victory in the 100m backstroke and being awarded with her first Gold, Theresa presented it in a private ceremony to her brother, honoring his courage after being paralyzed at age 19 in a bicycle accident. Her second medal was earned in the 400m medley relay.

Today, Theresa is highly sought after as a speaker by corporations, conferences, community groups and schools. Her speeches touch upon the potential of individual performance and the importance of teamwork in achieving those goals. She has also spoken on the values inherent to the Olympic Movement.

With a bachelors in therapeutic recreation from the University of FL and a masters in clinical social work from Ohio State, Theresa was employed for several years as a CSW, specializing in pediatric hematology and oncology.

Currently employed by Bank of America in Wilmington DE  as a Senior Vice president in Customer Experience for Small Business, Theresa remains active volunteer on the US Olympic Alumni Committee and the DE Food  bank.