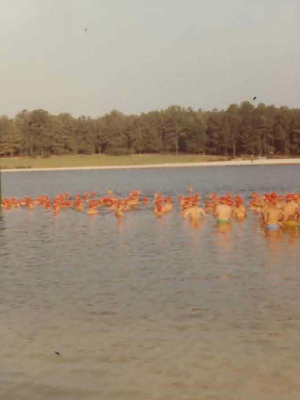 As many of you may know by now, my daughter Keren was diagnosed a second time in December of 2021 cancer!  This time, the cancer has manifested itself in her shoulder as an osteosarcoma.  She began chemotherapy treatment at the Aflac Cancer and Blood Disorders Center at Children's Healthcare of Atlanta in early 2022 and will undergo a radical shoulder reconstruction later this month before continuing chemotherapy treatment for another 10 or so weeks.  Because Keren is undergoing this extensive treatment, she is unable to compete in the wonderful 1st Annual "Triathlon" fundraiser that her team captain Abby Mowinski developed in honor of Keren this year to raise funds for three individual and worthy causes.

As such, in honor of our warrior, Keren, as well as to mark the 40 year anniversary of a triathlon I completed at Callaway Gardens with several Dynamo teammates back in 1983, I have decided to figure out a way to get into shape over the coming months to be able to complete in her place.

This page is page is dedicated to the 1 mile open swim leg of the Swim Across America event that is part of Team Keren Triathlon!

I invite you all to join us (Team Keren) in helping to support Swim Across America, and specifically the Aflac Cancer and Blood Disorders Center at Children's Healthcare of Atlanta during this leg of the Team Keren Triathlon.

There are many ways to help, through donations, participation, following along with our progress over the coming months as well as getting the word out to your friends, neighbors and business partners about the importance of supporting the activities associated Team Keren's philanthropic outreach....or just providing encouragement to those of us who are participating!  Because this is going to be hard!  We are not as young as we used to be...At least in my case.

Just remember, any support you can provide is greatly appreciated in advance, and if you follow along you might get to see me doing some pretty funny things as I try to get in shape to make this 1 mile open water swim.