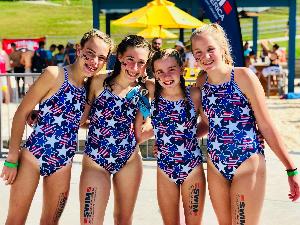 Our team honors two sarcoma patients, Grace Bunke and Julie Granger Jessee. Julie was diagnosed with an inflammatory myofibroblastic tumor (IMT) in the right lung in 2015, finding out that she'd been living with the tumor for several decades. IMT is a rare form of sarcoma that usually occurs in children, but can sometimes take years to manifest in adults, as it did for Julie. Julie underwent chemotherapy, two major surgeries, and radiation treatment to demolish her tumor that she named "Benedict." She wrote about Benedict in her blog and coined the hashtag #takethatbenedict on social media.

Grace Bunke was diagnosed with metastatic osteosarcoma when she was 11. As part of her treatment, she underwent multiple rounds of chemotherapy, a uniwue leg amputation called rotationplasty, and 2 lung surgeries. Grace relapsed a year and half after completing her initial treatment. As a result, she had an additional lung surgery and enrolled in a clinical immunotherapy trial. In July 2017, she relapsed once again, but this time she was given a terminal prognosis. Grace was going to die. But this news did not stop her from living. In fact, she continued to swim competively up until a few months before her death on March 25, 2018.

In 2017, Grace and Julie teamed up and swam the mile together at Lake Lanier cheered on by family and friends and complete strangers.

Team Amazing Grace + Take That Benedict is honored to swim for the patients at the AFLAC Cancer & Blood Disorders Center, a very meaningful place for both Grace and Julie. AFLAC was Grace's treating hospital and clinic. Within the clinic and hospital walls, Grace met and connected with a brilliant team of medical professionals. AFLAC is also a place where Julie worked part time as a physical therapist.

We hope to make a difference by making waves to fight cancer together! As Grace said, 'Hope has no finish line!'

If you are a member of this team and would like to customize this page with a special message or team photo, please contact us and we can designate you as the team captain.