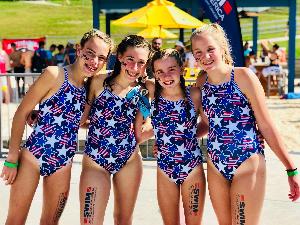 Sadly, on March 25, 2018, Grace took her last breath on this earth. She was 14 years old.  As a way to honor Grace and raise money to fund cancer research, her mother is swimming in 14 of the SAA open water events in 2021. Grace believed that hope has no finish line. We invite you to believe as Grace did by joining ‘Team Amazing Grace’ so we can make waves to fight cancer together one open water event at a time.