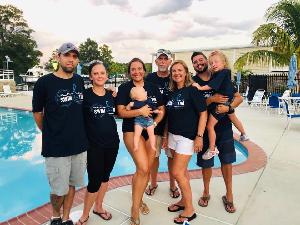 A word that holds such power, the power to destroy anything in its path. A word that incites a such a deep fear, it’s almost palpable. We have all spent days in denial, desperately grasping for hope through the quicksand we feel we are sinking deeper into. Life is never the same after you hear those words: you have cancer. I remember the day so vividly, November 2, 2018, impatiently waiting for my brother to finish with the endoscopy that would reveal the truth to his symptoms. As I stood next to recovery bed, his doctor gave us news that set our lives in a new direction. I filled my days pouring my mind over medical journals, trying to understand what was coming. Nothing could truly prepare us for what was ahead, but despite all of the fear, all of the grief, we managed to find times of gratitude, happiness, and relief.

My brother was diagnosed with Stage 4 stomach cancer last November, at twenty-nine years old, a mere two weeks after his second daughter was born. No one expected this. Of course, symptoms were there, but those symptoms also aligned with a host of other non-life-threatening problems. Surely this couldn’t be cancer. Unfortunately though, it was. After some initial testing at Walter Reed, my younger brother, MM1 Machinist Mate First Class Tim Treadwell with the US Navy, began treatment at John Hopkins in December 2018. Surgeons Mark Duncan and Fabian Johnston and oncologist Adrian Murphy laid out a plan to give Tim the best chance at survival that they could possibly give. Tim endured eight total rounds of very rough chemotherapy, along with a major nine hour operation where Dr. Duncan and Dr. Johnston were able to successfully remove all signs of visible disease, a huge win!!

Nearly ten months after his initial diagnosis, life is much different. Day to day without nearly your entire upper GI system is hard. Recovery from such surgery, where part of your esophagus, your entire stomach, part of your small intestine (just to name a few), and where you end up receiving HIPEC (heated chemo washed throughout your abdominal cavity), it’s a long, rough road. That road has been plagued with tough hurdles. But through the past ten months, we have seen such compassion, love, and life, too. A major component has been who we have met at Hopkins. Not only have the doctors been amazing, but everyone else as well. Nurses throughout Tim’s care, that we still go back and visit with (special shout-out to Shantel, Tim’s chemo nurse, and the nurses and techs in Weinberg 4A!), technicians, administrative staff, they're been amazing. Another very special and pivotal person has been Katie Swan, who is in charge of Hopkins for Heroes. She’s made scheduling and treatment navigation so much easier. A cancer diagnosis ultimately translates into a full time job, and having Katie to help make that job easier has been priceless. Prior to Christmas last year, Tim’s chemo was causing him to have neuropathy and cold-sensitivity, which proved to make putting out holiday lights nearly impossible. Cue Katie and some other amazing people: in a couple hours, they had Tim’s house decorated for Christmas, a sight that lit the eyes of his four-year-old daughter so bright. Having a person at Hopkins, on the inside, that not only provided so much help for treatment, but recognized more, and saw the person and their family, struggling through an impossible situation, and took helping out a step further, it’s beyond humbling.

If you’ve made it this far, you may be wondering where this is going. As Tim was progressing through his post-surgical chemo in the spring, Katie let us know that she was participating the in Swim Across American event being held in Baltimore in September, and that she was doing it in honor of Tim. For anyone who doesn’t know, Swim Across American Baltimore raises funds that go directly to Johns Hopkins cancer research. In fact, the funds from prior years brought Keytruda (a drug for PDL1 positive cancers) to more patients. As a PDL1 positive cancer patient, this could be huge for Tim should he ever need it. After reading that, naturally, I wanted to join Katie on this swim. As the summer progressed, we have added more team members, including Cagla Oruc most recently. Our team has grown to six swimmers, and we’re almost at $5,000 raised. The support that we’ve seen the past few months as we approach this fundraiser has been incredible and we know that our hard work, and the generosity of those who support us, will be helping patients like my brother.

If anyone would like to support us in our efforts, here is the link to our team page: https://bit.ly/2ZxQZVK

Cancer has taken a lot from us, but through this journey, we've been able to take back some power and contribute towards research that can save lives. Thank you for taking the time to consider donating and learning about our why!

2018 UPDATE: Please send all check donations to the following address despite what might be listed above:

Please include a note mentioning the name of the swimmer you are supporting.