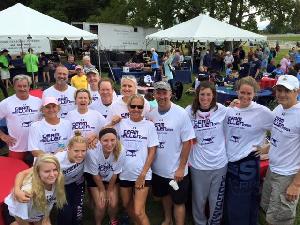 Team 2015..any more swimmers or volunteers?

Team mELLENoma - Swim to Live was formed in 2010 for the first SAA Baltimore, to honor Ellen Dierkes, who was waging a war against stage 3 melanoma that eventually spread to her lungs and liver for stage 4. In year 2, Ellen was treated at NIH in Bethesda, Maryland while we were swimming at Meadowbrook Pool. A few months later thanks to a radical treatment, Ellen’s tumors were eliminated for which we were so grateful. Without cancer research Ellen and thousands of others may not have survived or lived as long. Unfortunately Ellen died of endometrial cancer two years later in November 2014.

Captain, John Dierkes (husband of Ellen Dierkes) has been involved in SAA since 1999 when he started swimming across the Long Island Sound in Larchmont, New York for their SAA event. Ironically, John had a melanoma removed in 1996 and was swimming on Team Kelly, honoring Matthew Kelly, who died from melanoma a few years earlier. John continues to swim on Team Kelly in Larchmont for the past 22 years.

Our whole team has joined in this important effort to support the meaningful work of Dr. Diaz (now at Sloan Kettering), Dr. Bill Nelson and the Johns Hopkins Kimmel Cancer Center staff as they discover important diagnostic tools like the PapGene test and the circulating tumor DNA test to help detect early or recurrent cancers. We have made a big difference in extending lives and giving hope to survivors.

Thanks for all who have supported team mELLENoma and Swim Across America and our significant contribution to the cause! In the past 11 years our team has raised more than $450,000 of a total of more than $5,000,000 in Baltimore for which we are so grateful. Those patients’ lives we are saving are even more important. Help us do even better this 12th year and come out and swim or volunteer on September 19th.

We are eternally grateful for the financial and volunteer support to this cause!

2020 UPDATE:
Please send all check donations to the following address despite what might be listed above:

Please include a note mentioning the name of the swimmer you are supporting.