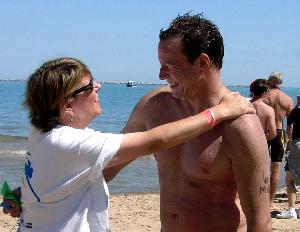 Very early on Saturday, August 8, a few hundred people, including me, will plunge into Lake Michigan. Why? To raise money for cancer research.

I’m in because my brother Russ used to swim this event. Six miles too, more than the course even consisted of. Bummer is, I don’t know why Russ swam or how he got involved. And now he's gone. But 24 or 25 years ago (it’s hotly debated which), Russ did get involved with SAA (Swim Across America) and became one of the best volunteers the Chicago branch of this national org ever had. Such a matchless fellow that an annual award began, named after him.

Most years I’d go to the lake and see at least the start of the swim, to support Russ's efforts. I’d be on my bike, timing his loops, straining to see which big, strapping arched arm was his as he sliced through everything from rip currents and mild chop to gutsy waves and glassy serenity. Soon’s I’d pinpointed him I’d scream, full throttle, “Go Russ.” Go figure, but he always heard me, and that arched arm of his then bent and waved to me on every stroke til he was gone from sight.

So now I’m involved. It’s my way of keeping him close. Attaching myself to who and what he attached himself to. (Do you grieve that way too?)

And part of the rub of doing these things includes the fundraising bit.

The recipient of all these swimming dollars: Rush. Right back where I was treated for ovarian cancer in 2010/11, (during which time I also wasn’t noticing that Russ was apparently pretty sick himself). It is an amazing hospital with great doctors and fantastic nurses.

So, if you have 10 bucks or any amount of bucks to spare, please consider Swim Across America, and, specifically, Team Russ, and me, team member Mary Haffner Holloway.

Everlasting thanks and gratitude!

"Thumbs Up" Badge
This participant has raised at least $250 and is well on their way to reaching the fundraising minimum!
Personal Progress:
of Goal
$400 Raised
$1,000.00
Fundraising Honor Roll
Dave & Becky Twaddle
$100
Ms. Mary Haffner Holloway
$50
Richard and Barbara Haffner
$250

If you prefer to donate via check, please send check donations to Swim Across America - Chicago PO Box 223 Riverside, IL 60546.