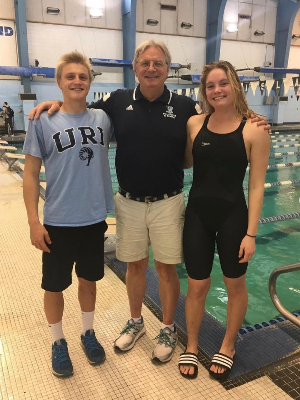 One month ago, I received a text from Fritz Homans, a close family friend. You know, one of those kinds of friends so intertwined with your collective family history that you may as well share DNA. He told me he had pancreatic cancer and asked me to tell the fam. I called him. He said it was pretty advanced. It's not the kind of cancer they catch early. It's not the kind of cancer many people survive. But he dug in to fight. He has a son, a daughter, a sister, a mom, a dad, a girlfriend, and a whole bunch of other family and friends like us who were counting on him to fight. Turns out, the chemo exacerbated his cancer. He died on June 16th. Just weeks from diagnosis to that's all she wrote. He didn't have a chance.

So I'm swimming on June 25th to support the kind of gene-based cancer research the beneficiary of the Fairfield County Swim funds ...to give the next Fritz more than a few weeks, to give the next Fritz a chance ...and because it's the only thing I can think to do with the sadness my family and I feel. I’m also swimming for my dad, for Louise Prescott in whose honor the Dicksons made their gift, for Tora, for Rick, for the many, many holes this horrible disease has ripped in our lives. …and I’m swimming for my friends and family who have beaten back the tear, to shore up their fight.

So I ask, for every Fritz, friend and family member we’ve known, for every Fritz, friend and family member we will know (in our lifetime, 1 in 2 men and 1 in 3 women will be diagnosed with cancer), won't you come swim with me? Or if you feel pulled to this and are able, will you consider donating? Any and every amount means so much and 100% of what we raise goes directly to the research.

One of our own: An NCAA All American, Olympic Trials qualifier for the 1976 and 1980 Games and two-time captain at UNC-Chapel Hill, Fritz was an elite swimmer and is in the Maine Swimming Hall of Fame. He also participated in Swim Across America events, as did his daughter Hannah who swam for the University of Rhode Island. His son Harry swims for the USC Trojans and competed in the Olympic Trials last summer.

If you prefer to donate via check, please send check donations to the address below.
Swim Across America
1273 E Putnam Ave,
PO Box 681,
Riverside, CT 06878