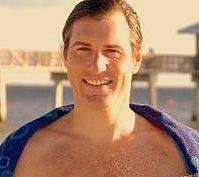 Thank you for visiting my page.  Please take 5 minutes to read and act today!

In November 2017, I was diagnosed with Stage IV lung cancer. By the time it was diagnosed, I had tumors throughout my right lung (which was partially collapsed), lesions on my spine and hips, and 27 small tumors in my brain. To say it was a shock would be the ultimate understatement. I had just turned 51, am a never-smoker and lifelong athlete, and had been a picture of health my entire life -- in fact, just a couple months earlier, I had swum 7+ miles across Long Island Sound.

I wasn't sure at that time what the future would hold. Christmas? Another summer? Would I see the many great milestones ahead for my three teenage daughters? What time would Sally and I have together? Would I ever swim or play golf again? What about that wine I just bought that I was going to age for 10 years...?

I was told I was "lucky": I had access to leading experts in the field and world class hospitals; Further testing showed I have a very specific and rare type of lung cancer that has highly targeted drugs available to treat it; And, there were additional treatments in development. Perspectives shifted a bit from months to possibly years.

But I've realized since, luck only had a little to do with it and research had a lot. That's why I'm writing today. Funding for early stage research into potential cancer treatments is vital. Much of that research -- which has led to breakthroughs in targeted therapies like I am on, immunotherapy, and other protocols, is often too early stage to qualify for federal government, corporate or major foundation funding.

I first got involved with Swim Across America over 25 years ago at its first events. Since then, it has grown to have annual events in dozens of cities around the country that have raised over $80 million to fund early stage research in labs like those at Memorial Sloan Kettering, Dana Farber Cancer Institute, MD Anderson Cancer Center and so many more. This research is changing the course of cancer treatment and outcomes across a wide range of cancers and directly benefiting the 40% of Americans who will face cancer during their lives.

Without this kind of research, there's a very good chance I wouldn't be here today asking for your help. Here's why: The drug I am on today received FDA approval just one month before I was diagnosed. But before that, it was an idea that was born in a lab years or even decades ago and was nurtured, developed and tested with funding provided by groups like Swim Across America until it became something a pharmaceutical company would take a chance on.

What makes this year even more special -- and why I'm asking you to do the most you can to support us -- is that a group of my friends from the swimming community have come together to form Team Bruce, a one-time "super-team" with the goal of breaking team fundraising records for SAA. This is a team of 60+ people I have swum with and against for years, even decades. It's an honor to be among them and humbling they'd come together in this way.

But Team Bruce isn't really about me, it's about celebrating the wins that are becoming more common in the fight against cancer thanks to research. And about creating even more opportunities for wins in the future.

We chose that theme because I'm winning my fight -- since I started treatment, my tumors have shrunk 80-90%, the side effects of treatment are manageable, and I'm able to lead a fairly normal life. There isn't a cure for what I have -- yet -- but treatments today have transformed it from a terminal illness into a chronic disease.

As I said, that's all thanks to research that you can help support by donating today. And to give you even more inspiration to support us, I'll be joining Team Bruce in the water of Long Island Sound on July 27th and swimming a 5K as part of Swim Across America's Long Island Sound swim benefiting Sloan Kettering and Morgan Stanley Children's Hospital.

SO PLEASE GIVE AND GIVE GENEROUSLY. Your support today will mean someone like me will have the opportunity to win their fight in the years ahead.

You can make a credit card donation here, or send a check to Swim Across America, PO Box 217, Larchmont, NY 10538.

Checks should be made out to Swim Across America but please include a note mentioning my name as the swimmer you are supporting!