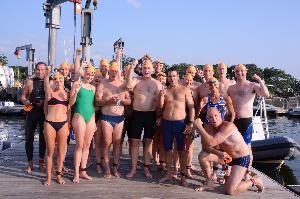 Cancer... we all know someone. In our lifetime, 1 in 2 men and 1 in 3 women will be diagnosed with cancer. That's just a crazy statistic.

Swim Across America has been working to support cancer research, treatment, and prevention for more than 25 years. In that time SAA has raised millions for Sloan Kettering and the Columbia Children's Hospital, and the Cancer Support Team of Westchester - this has made a real impact in the fight to find a cure and in the lives of families affected.

Since our effort began in Westchester, the landmark discoveries and treatments developed have been truly game-changing. Memorial Sloan Kettering was nominated for the Nobel Prize in Medicine for the development of Immunotherapy. But the concept of immunotherapy did not qualify for grant money and would not have proceeded to the development stage but for the funding from SAA - and donations from you.

On Team Masters each of us has our own reason for swimming - a lost parent, a child who has been pronounced cancer-free, a friend fighting for his/her life - for each of us it is different. But the goal is the same - to find new cures and defeat Cancer.  That's why we fight.  And that's why we're asking for you to help:  Please donate to a Team Masters Swimmer you know.