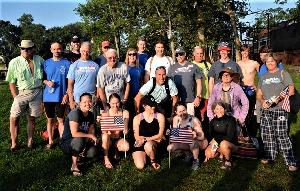 In our lifetime, 1 in 2 men and 1 in 3 women will be diagnosed with cancer. That's just a crazy statistic.  And we all know someone …some luckier than others.

Swim Across America has been working to support cancer research, treatment, and prevention for nearly 30 years. In that time SAA has raised millions for Sloan Kettering, the Columbia Children's Hospital, and the Cancer Support Team of Westchester.

Since our effort began in Westchester, the landmark discoveries and treatments developed have been truly game-changing. We have watched members of our own team as they received absolutely devastating stage 4 diagnoses - only to discover, over the ensuing six months, that a match had become newly available which ultimately brought them to remission.  An honest-to-God miracle.

Memorial Sloan Kettering was nominated for the Nobel Prize in Medicine for the development of Immunotherapy which they have shared with the world. But the concept of immunotherapy did not qualify for grant money and would not have proceeded to the development stage but for the funding from SAA - and donations from you.

We now have better tools than ever.  We see a direct-line correlation between dollar investment and actual new cures.  And we have momentum.  That's why we fight.  I'm asking for you to help because I know YOU are going to save lives.