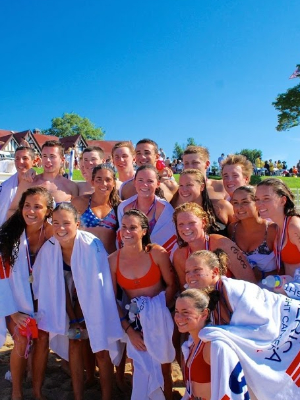 Team 11 North came to be in the summer of 2014, honoring the memory of my grandmother, Kathleen Carello, who passed away that March from liver cancer. She came to America from Belfast in 1961, creating a family of five children, ten grandchildren, and countless honorary relatives. “11 North” stands for the home where she lived almost all her life, which was a warm and welcoming place for family and friends. Alongside my grandmother, we swim to honor my grandfather, Bruce Mitcheltree, who we lost to renal cancer in June 2019.

Team 11 North is meant to mirror the welcomeness felt at 11 North, and so we swim in memory of not only my grandparents and those we’ve lost before them (Tom Murray, Tom Freeman, and John Carello), but in memory of all the people in our team members’ lives who are currently fighting their battle, or who have unfortunately lost theirs. We swim to keep alive the memories of those we have lost, to honor those who are fighting their battles, and to help find a cure.

“The show goes on”

You can make a donation online by clicking on the 'Donate Now' button on this page.

Check should be made out to Swim Across America but please include a note mentioning our team or the swimmer you are supporting!