A CHARITY SWIM TO FIGHT CANCER
On September 25, Olympian Elizabeth Beisel will swim a 20km route from Pt. Judith to Block Island in her native Rhode Island and raise funds to support cancer research and clinical trials for Swim Across America.

My name is Elizabeth Beisel and I am a swimmer. I have competed for the United States in the 2008, 2012, and 2016 Olympic Games and have won a couple Olympic medals, but my swimming career and accomplishments pale in comparison as to why I’m here today.

Last December, my dad was diagnosed with stage 4 pancreatic cancer. While this news was shocking, our family remained nothing but hopeful that my dad would beat this horrible disease. He remained hopeful too, maybe even more so than the rest of us. After witnessing the pain and suffering my dad was enduring and how quickly his quality of life deteriorated, I felt the overwhelming need to help not just my dad, but anyone and everyone battling this dreadful disease. I figured with my swimming platform, the most impactful way I could help would be through a charity swim with Swim Across America. I chose to swim from Pt. Judith to Block Island, something that I’ve wanted to do since I was a little girl. I viewed my swim as an exciting, impactful event that would give my dad something to look forward to, while also an opportunity to raise funds to fight against a disease that changed my dad’s life.

Just over seven months after my dad’s diagnosis, he passed away.

I envisioned him being in Block Island waiting for me to finish with an ear to ear grin on his face. I replayed the scene over and over of how as soon as I reached land I would run into his arms and give him a hug and he would whisper proudly “You did it, Elizabeth.”

While he’ll never get to see me swim to Block Island and I’ll never get to hug him again, his fight wasn’t for nothing. I know that my dad’s battle along with the money raised by Block Cancer will save someone’s life one day, and he’s smiling knowing he gifted someone and their family the most precious gift of all time.

Please join me in the fight against cancer. My dad would want nothing more than to make a difference in this world, and alongside Swim Across America, I know he can.

SWIM UPDATE: New Block Cancer swim dates! The timeframe we are looking to swim during is from September 25. The Block Cancer team will keep everyone posted via social media as we get closer to the swim!

THE CAUSE: Swim Across America is a national non-profit that runs swimming-related events throughout the country to support cancer research at the most highly recognized hospitals and institutions. To date, $100 million has been granted nationwide over the last 35 years and more than 100 Olympians have participated in SAA events.

THE SWIM: On September 25, 2021, Elizabeth Beisel (with the help of her incredible support staff) will attempt to be the first woman to swim the 20km (12.4 mile) route from Pt. Judith, RI to Block Island, RI. Elizabeth will adhere to Marathon Swimmers Federation rules throughout the entirety of her swim. The swim will be nonstop and unassisted. 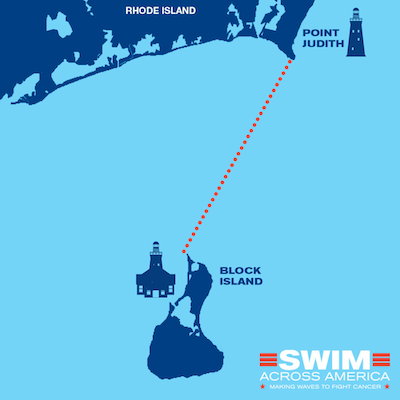 HOW CAN I SUPPORT BLOCK CANCER?

BLOCK CANCER STORE
All proceeds from purchases will support Swim Across America.